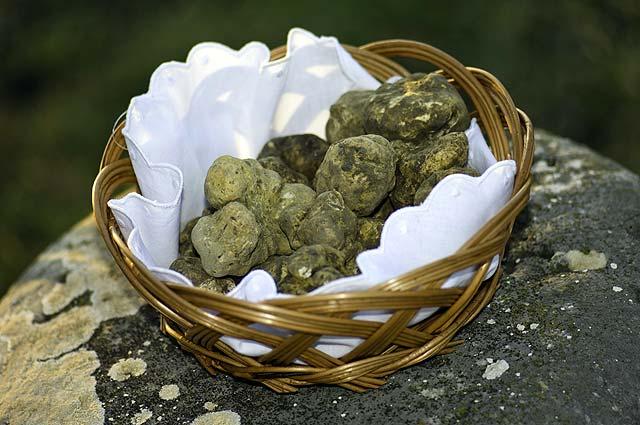 The culinary chefs agree upon one thing only: the truffle should be placed at the very top of the gastronomic delicacies list. The truffle is a mysterious and unique tuber, completely concealed underground. It does not dispose of a plant suspended above the ground and therefore, no human being is able to spot it, except for a well-trained dog tracing it by smell.

The land of our heart-shaped peninsula consists of two types of soil texture; the intensely red one in the coastal area and of the grey, clayish one in its central part. The truffle grows exactly in this grey soil, its epicenter being in the damp Motovun forest constantly moistened by the Mirna river flowing through its woods. To be more precise, it is mainly spotted in the County District of Oprtalj, by the townlet of Livade, and in the Buzet area, where Buzet has already been renowned as the TRUFFLE PLACE.

The white Istrian truffle is one of the most highly appraised truffle species in the world. For decades, it has been smuggled out of our country in order to enrich the taste of various European cuisines where its origins have constantly been kept in concealment.

And after all, what is a truffle really? Perhaps an odd looking potato-like bulb of highly unpleasant smell, but once you get used to it and its culinary uniqueness, you become its true and eternal admirer. You tend to get addicted to it as one does to any other worldly vice.